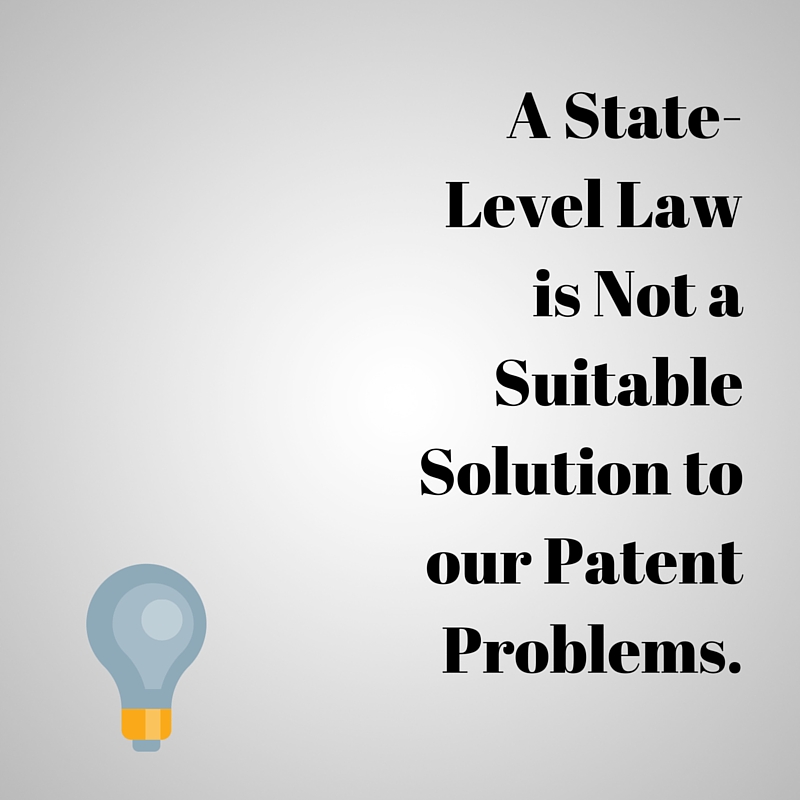 On Monday, February 22, the Assembly Commerce and Economic Development Committee voted unanimously to advance A310, which would create a state court cause of action against persons who pursued a patent claim in bad faith. NJCJI testified against this legislation because it more likely this bill would increase frivolous litigation than solve the so-called “patent troll” problem.

NJCJI did not come to the decision to oppose this legislation lightly. As proponents of an equitable and predictable civil justice system, NJCJI appreciates that meritless patent litigation and the significant costs it imposes on New Jersey businesses is a concern. We also share the alarm over “patent trolls” who are taking advantage of the proliferation of patents, especially in the IT realm, to make meritless demands and threaten frivolous litigation. However, NJCJI does not support passing a state-level fix to the patent law system.

Trolls Are Not the Real Problem

It is important to recognize that trolls are not the real problem. Rather, they are a symptom of larger issues in the litigation system. As is true throughout the civil justice system, the high cost of litigation enables patent holders to threaten frivolous litigation and bargain for excessive settlements.

In fact, aggravating factors within the patent system, such as an abundance of overbroad patents, and the particularly high cost of patent litigation, actually mirror the dynamics found throughout the civil litigation system. However, there is one big difference between patent law and the rest of the civil justice system. Whereas most flaws in the civil justice system are amendable to remedy via state legislation, patent law is exclusively a federal question according to the terms of the Federal Constitution.

As a result, targeting frivolous patent demand letters through state legislation cannot address the underlying issues of patent law that incentivize the bottom-feeding patent trolls, and instead is likely to do more harm than good.

A State-Level Law is Not a Suitable Solution

The proposed legislation delineates a list of factors to be considered by a state court as evidence of whether a person has made a “bad faith” assertion of patent infringement. It includes factors like the degree of detail provided in the patent demand letter and whether the entity making the demand is an actual inventor.

However, the single most important factor in determining whether a patent infringement claim is made in bad faith is whether the claim itself has merit. Regardless of whether the enforcement of the patent is socially beneficial, if the claim is potentially valid under federal patent law, it cannot be deemed a bad faith claim. Whether a claim is meritless is a question of federal law, and not one that state court judges are well equipped to handle.

There are a variety of things going on at the federal level that have the potential to fix the patent troll problem:

It may seem counter-intuitive that we are asking our legislature to do nothing while businesses across the state suffer, but incentivizing state level litigation in hopes of fixing problem that can only be solved at the federal level is futile at best.

NJCJI is therefore opposing A310, which is being sponsored by Assemblymen Singleton (D-Moorestown), Bucco (R-Randolph), and Wimberly (D-Paterson), and is identical to legislation which last session was voted out of committee in the Assembly, but was never voted on by the full Assembly.

We also oppose S1696, a companion bill that has been introduced in the Senate by Sen. Bucco (R-Denville). Last session an identical version of this bill stalled in committee.

NJCJI does appreciate the concern over the impact of frivolous litigation, and we would welcome the opportunity to improve the incentive structure in the civil litigation system at the state level in general. Unfortunately, patent litigation is the one area where the remedy is best left to the legislative and judicial bodies with the constitutional capacity to address the underlying problems – Congress and the federal courts.

Click here to read NJCJI’s testimony in opposition to A310.

Please contact NJCJI’s Chief Counsel, Alida Kass, if you have questions about this legislation.