What is it With Coffee & Frivolous Lawsuits? 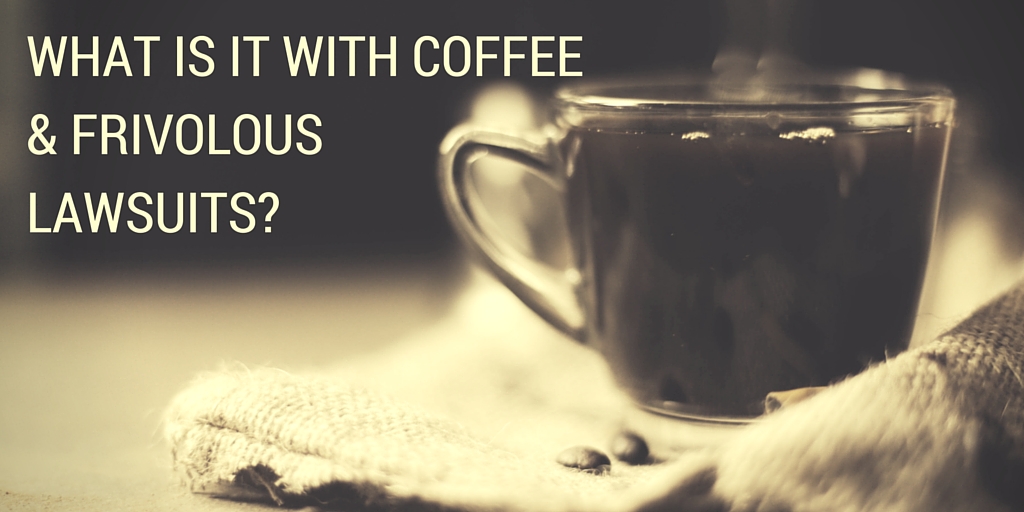 You probably have heard of the McDonald’s coffee case, the one where a jury awarded a woman over $2 million because the coffee she was served was so hot it burnt her when she spilled it on herself in the car. But have you heard about the coffee case over cup sizes? Or how about the one over iced coffee with “too much” ice in it?

What is it about coffee that makes it the subject of so many lawsuits? It probably has less to do with the product itself than it does with the fact that it profitable to file such suits. The suit over cup sizes is a good example of this.

In the cup size lawsuit, two California coffee drinkers argue that Starbucks advertises that it sells 12, 16, and 20 ounce drinks, but that in practice the drinks are about 25% under-filled because the baristas follow standardized recipes and preparation instructions which direct them to leave a ¼ inch space between the top of the cup and the ¼ inch of foam on top of the drink’s liquid components.

Now, a reasonable consumer would understand that advertising cup size rather than the exact amount of liquid in a drink is not some evil money-making scheme, but common sense. A latte isn’t a latte without foam, and unless you want to spill coffee on yourself, having a little bit of space between the drink and the cup’s rim is a good thing.

The plaintiffs in this case filed their lawsuit as a class action in federal court. They don’t just want a refund, or for Starbucks to start filling their cups up to the brim, they want over $5 million to be doled out to every latte drinker in America to compensate all of us for our collective suffering.

If Starbucks is like most businesses who are sued in suits like this, they will settle. The plaintiffs who brought the case will end up with a couple thousand dollars, and the rest of us will end up paying higher prices on our lattes because Starbucks will pass on the cost of this litigation to consumers. (Think we’re being overly dramatic? Take a look at what happened to Subway’s $5 Footlongs after a lawsuit was filed over them.)

The lawyers, however, will make out like bandits. In almost every headline-grabbing consumer class action lawsuit filed over the past few years, the lawyers have walked away with millions. It is doubtful this lawsuit will prove to be the exception.

All this explains why so many of these sorts of lawsuits are filed, but it doesn’t explain why so many of them seem to involve coffee. For that, you can look at the numbers 54% of Americans over the age of 18 drink coffee every day. Few other food products are going to have that kind of market, and the larger the market for a product, the larger a class action you can file.

How much longer are we going to keep allowing unreasonable consumers and greedy attorneys to abuse the system while the rest of us pay higher prices?  It is time to make some common sense reforms to our consumer laws and our legal system so we don’t keep encouraging lawsuits like this.