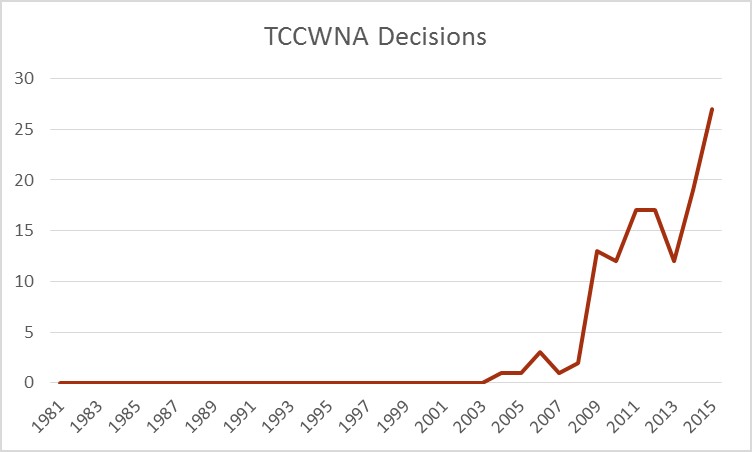 An analysis of available written decisions referencing TCCWNA shows how the law lay dormant for many years, and how rapidly the number of cases involving TCCWNA is growing. This is astounding when you consider the vast majority of TCCWNA cases do not result in a written decision, so this is just a small sample of the total amount of TCCWNA litigation.

Over the past few years, we’ve been sounding the alarm about the unique danger New Jersey’s Truth-in-Consumer Contract, Warranty and Notice Act (TCCWNA) poses to our state’s businesses. Unfortunately, it seems members of the trial bar are the only ones listening. Plaintiffs’ attorneys are filing an increasing number of TCCWNA-based class actions against companies doing business in New Jersey.

If these lawsuits were actually fighting consumer fraud, we would have little to say about them, but as it is, they are little more than a court-sanctioned shakedown scheme. In the vast majority of TCCWNA lawsuits filed today, the alleged harms are trivial technicalities, and the plaintiffs have suffered no actual harm.

Furthermore, the beneficiaries of these lawsuits are generally not consumers, who are often not aware of the legal battles being fought on our behalf. The only clear beneficiaries are the attorneys. It is time for the legislature and the courts to take a closer look at this litigation and make some common sense changes to the law that bring it back to its intended use.

If a business violates TCCWNA (which necessarily means they violated some other legal right), it is on the hook for $100 or actual damages, plus reasonable attorneys’ fees and court costs. Consumers may also petition a court to void a contract that violates TCCWNA.

Although the law is supposed to apply only to money, property, and services, used for personal, family or household purposes, the court has repeatedly expanded the applicability of the law by interpreting “consumer,” “property,” and “warranty, notice or sign” very broadly.

Consumers cannot waive their rights under the Act, which are to be considered an additional benefit above and beyond any other rights a consumer may have.

What is driving the uptick in TCCWNA cases?

TCCWNA was signed into law in 1982 by Gov. Brendan Byrne during one of his last days in office. Unfortunately, we have little information about whether or how consumers made use of the law during the first two decades it existed. It is not until 2005 that a written opinion referencing a TCCWNA claim really appears.

Class Actions At Their Worst

2009, however, is the real inflection point for TCCWNA claims. That year, in United Cons. Fin. Ser. v. Carbo, a New Jersey appellate court ruled that TCCWNA claims could be brought as a class action, even if the plaintiffs have suffered no ascertainable loss.

Instead of helping one client win $100 and getting your fees paid for by the other side, the court allowed an attorney bring a class action, so if the defendant loses they will be on the hook for ($100 * n clients) + attorneys’ fees and costs. This much larger financial threat pushes defendants to settle rather than spending a lot of money on litigation and risking losing.

In 2010, in another NJ appellate court case, Smith v. Vanguard Dealer Serv. LLC, the court held that New Jersey business owners may be held liable for TCCWNA defects in the warranties offered by the out of state or out of country manufacturer of a product they sell – even if they didn’t know the product came with a warranty.

TCCWNA made the jump to the online world in 2013 in the case Shelton v. Restaurant.com, Inc. Since that time, the number of e-commerce related cases has ballooned. At the heart of most of these cases is the TCCWNA provision prohibiting statements like, “void where prohibited” unless the contract, notice or sign says what, if any, provisions are unenforceable in New Jersey. There is no indication that any of the consumers involved in any of these cases has been actually harmed by the terms and conditions they are suing over.

In many written decisions on TCCWNA, the courts talk about New Jersey’s reputation for being tough on consumer fraud, and how consumer protections statues are remedial in nature and should be read broadly. There is a sense that the courts feel like they have to live up to this by pushing the boundaries of TCCWNA and putting a thumb on the scale in favor of plaintiffs.

This is not helped by the fact that the government has ceded enforcement of TCCWNA to private attorneys, so they are in effect “private Attorney General” cases. The courts look favorably on these types of cases under the assumption that the government approves of the action being brought.

However, it is not clear that the government would approve of many of the cases that are being brought, because they are an extremely harsh reaction to what are often minor violations. If the government itself was doing the enforcement, it would likely use its power of prosecutorial discretion to let some violators off the hook if they correct their mistakes.

All of these elements combined has created a perfect legal storm.

If you would like to join our effort to reform TCCWNA, and bring common sense back to our legal system, please contact Alida Kass, NJCJI’s Chief Legal Counsel.