In Consumer Class Action Settlements: 2010 – 2013, NERA analyzes settlements in consumer class actions using a database of 479 such cases created by them from public data sources such as newspaper articles. Cases included in the database are all consumer based, and include issues such as consumer fraud, antitrust-related claims such as price fixing, false advertising, and product liability claims.

One of the other data points NERA breaks out is where cases are located. Nearly three-quarters of consumer class actions, 345 of 479, were settled in five states: California, Florida, Illinois, New Jersey, and New York. 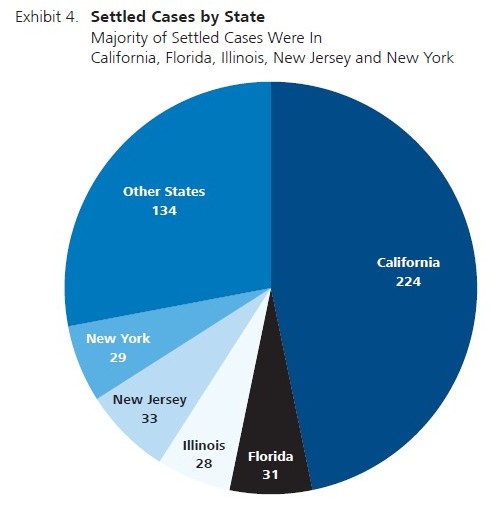 NJCJI is not surprised that New Jersey made the list of most litigious consumer class action states given our overly broad consumer fraud act, weak rules on expert evidence, unlimited appeal bonds, and the inability of litigants to appeal class certification decisions prior to final judgment.

If you are interested in learning more about consumer class actions, we encourage you to read NERA’s full article, and to register for NJCJI’s upcoming events on the topics.