Alida Kass, NJCJI’s Chief Counsel, testified before the Assembly Labor Committee on Thursday, May 15, about three bills that have the potential to increase employers’ exposure to litigation. 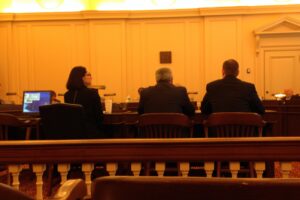 Alida Kass from NJCJI, Mike Egenton from NJCC, and Dave Brogan from NJBIA testifying before the Assembly Labor Committee.

While this bill appears to be a mere matter of disclosure, there are potential broader ramifications that are likely unintended.

We are concerned the bill will create a data mine of employment information of any employer doing business with any level of government. It could unfortunately be put to good use by the plaintiff trial bar to generate litigation, and prompt employers to think twice before doing business with the state. To the extent employers choose to do so, the costs of both compliance and risk will be factored into their pricing. Essentially public entities will be contracting for both the supply of services and the risk of a lawsuit, as a package deal.

Clarity and predictability are important elements in a well-functioning civil justice system. Unfortunately, A-2349, the Unfair Wage Recovery Act, addresses a point where the case law is already clear, and instead introduces considerable uncertainty.

The bill would upend a relatively settled area of law, creating new questions. It provides that an unlawful employment practice occurs with each affected paycheck, a point that is already well-established. The bill then invokes the “continuing violation” model, which was proposed and rejected in the New Jersey Supreme Court case Alexander v. Seton Hall University in 2010, and confirms the court’s authority to apply the “continuing violation” doctrine to “any appropriate claim as that doctrine currently exists in New Jersey common law.” While not directing the court to apply the doctrine, the bill lacks the clarifying language found in the federal Lilly Ledbetter law which limits the duration of available back pay.

The result is new confusion on a point where the law had been both stable and predictable. We would urge the legislature to amend the bill to mirror both the federal law, existing New Jersey case law, and the policy advocated in Justice Ginsberg’s Ledbetter dissent.

On May 12, the New Jersey Senate passed S1440, which would prohibit employers from declining to hire a job applicant just because he or she is unemployed. The bill provides that an employer or its agent can’t discriminate against an applicant “in any employment decision with regard to hiring, compensation or the terms, conditions or privileges of employment because the applicant is, or has been, unemployed[.]”

NJCJI and other pro-business groups were concerned that this language could create a cause of action allowing applicants who are passed over for a position to sue unless language was inserted in the bill specifically stating that the bill does not create a cause of action under this or any existing legislation. The bill’s sponsors listened to our concerns, and worked with Dave Brogan from NJBIA and Alida Kass from our office, to craft the following amendment to the legislation:

This language ensures that the protections offered to unemployed persons by this bill are preserved without exposing employers to lawsuits over the issue. We are grateful that the bill sponsors were willing to work with us to get this amendment into the bill.

All three of these bills fit into the broader topic of regulation by litigation, in which very simple regulatory disputes are brought before the courts instead of, or in addition to, the agency that has been legislatively granted authority over of the issue. Click here to learn more about regulation via litigation in New Jersey.