Do you hear that? That’s our ranking dropping.

New Jersey has a lot of things going for it. If you check out Choose New Jersey’s promotional materials touting our strengths you will see that we are “highly educated, perfectly located.” Unfortunately, those are not the only characteristics a state needs in order to see its economy thrive.

According to a recent survey conducted for the United States Chamber of Commerce’s Institute for Legal Reform by Harris Poll, 75 percent of attorneys at U.S. companies say a state’s lawsuit environment is likely to impact important business decisions at their company, including where to locate or expand. This is not good news for New Jersey since that same poll ranked New Jersey’s legal climate as 38th in the nation. That is a drop of six spots from 2012, when the survey was last conducted. 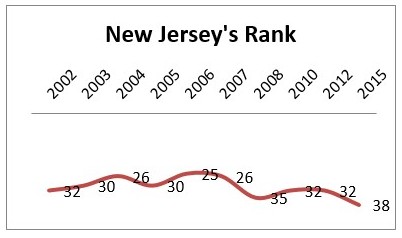 Our falling reputation, combined with the apparent importance of having a better reputation should serve as a wake-up call that it is time to enact some common sense legal reform. The survey even provides some insight into what areas we need to tackle first.

The survey ranked states on a variety of specific issues as well as overall. New Jersey ranks worst for timeliness of summary judgment or dismissal (44th), treatment of class actions & mass consolidations (41st) and discovery (41st). The silver lining to this bad news is that there are a lot of simple, concrete steps we can take to make improvements to address our shortcomings in these specific areas.

For example, allowing defendants to appeal class certification decisions when they are made, rather than at the end of a case, would potentially improve both our timeliness ranking and our class action ranking. This is a common sense solution to a problem that is now common knowledge in the business world.

Another area where we could easily make some changes is to our consumer protection laws. Despite their name, they do far more than fight fraud. They tie up businesses in complex red tape and allow employers to be dragged into court by enterprising lawyers who take advantage of arcane rules to sue on behalf of plaintiffs who have suffered no injury – not bodily, not emotional, and not economic. The lawyers in these cases rake in the cash while their clients collect coupons or some other small benefit. This type of litigation serves everyone poorly because it clogs the courts, provides little benefit to plaintiffs, and distorts the incentive to go after truly bad actors. The ease with which these claims can be brought in New Jersey has an impact on each of the areas where we do most poorly, as well as on our overall ranking.

Improving our legal climate is not a partisan issue. Many legal reform bills sitting in the legislature waiting for action are bi-partisan. Yet they are being stalled by special interests that benefit from our inefficient, high-cost system. It is time we move beyond our self-interest and work for the greater good by making some changes to our legal system that improve our business climate so we can grow our economy and start climbing in the rankings.