In 2014, doctors and insurers in the United States paid out over $3.89 billion dollars in medical malpractice cases, an increase of 4.4% over the previous year, and a continuation of the trend toward additional payouts after nearly a decade of decline. A closer look at the data reveals that the problem may not be rooted in quality of care, but in law and culture.

An infographic from Diederich Healthcare, a division of Diederich Insurance Agency, LLC; provides a visualization that handily summarizes the 2014 medical malpractice costs data from the National Practitioner Data Bank (NPDB). 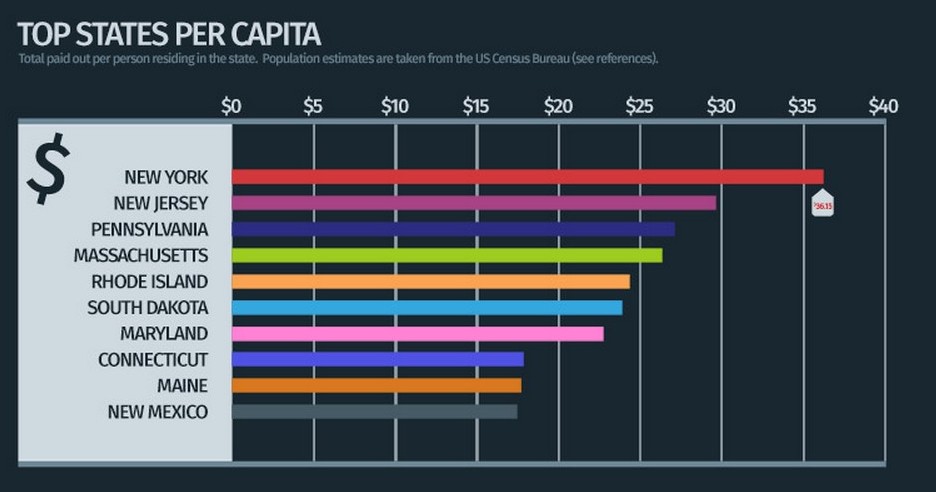 A look at the top payouts per capita suggests the Northeast has a malpractice problem.

New Jersey and New York are not alone at the top of the per capital pile. Many of our neighboring states also are in the top 10 when it comes to per capita costs.

This data could make you hesitate before heading to a doctor in the region, but information from another data source suggests that quality of care may not be the reason for the region’s outsize payouts. According to The Legal Intelligencer, the Administrative Office of Pennsylvania Courts just released data showing, “1,463 new medical-malpractice cases were filed [in Pennsylvania courts in 2014], representing a 46.5 percent decrease from the number of cases filed during the ‘base years’ of 2000 to 2002, when statewide medical-malpractice case recording began.”

Compare this to the NPDB data, which puts Pennsylvania just behind New Jersey in per capita payouts and second to New York in total payouts for the same year. This suggests that either doctors are committing fewer but more serious injuries, or that payouts reflect cost of living and the state’s tort law as much or even more so than they reflect the seriousness of injuries.