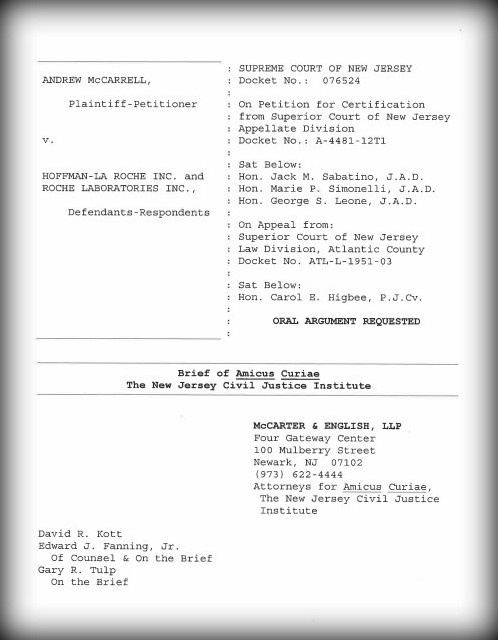 The New Jersey Civil Justice Institute has filed a friend of the court brief in a long-running case over the acne medicine Accutane. This is actually the second amicus brief NJCJI has filed in this case, the first having been filed in 2009. At issue this time around, is which statute of limitations should apply in this case, New Jersey’s or that of the state whose other substantive law will be applied in the case, Alabama. Which state’s law the New Jersey Supreme Court chooses to apply will determine whether this case moves forward or is dismissed as untimely, and will provide further guidance on how courts should handle statute of limitations questions in choice of law situations going forward.

In July 2003, plaintiff Andrew McCarrell filed suit against Hoffman-LaRoche for injuries that allegedly resulted from his use of the company’s acne drug Accutane. In 2007, a jury awarded McCarrell over $2.6 million in damages, but the Appellate Division reversed and remanded for a new trial because the defendants were not allowed to present contextual information on the overall number of Accutane users. The case was re-tried in 2010, and the jury awarded McCarrell just over $25 million in damages.

During both trials, the defendants argued that New Jersey should continue its policy of applying sections 145, 146, and 6 of the Restatement (Second) of Conflicts of Laws to all substantive choice of law questions in tort cases, including statute of limitations questions. This would ultimately force the court to dismiss the case as untimely since Alabama’s statute of limitations does not have a discovery rule like New Jersey’s does.

The plaintiff argued that section 142 of the Restatement, which deals specifically with statutes of limitations, should instead apply. Under 142, the default rule is the forum state’s statute of limitations applies unless the most-significant-relationship test suggests it would be more appropriate to apply the law of the state of the injury.

By the time the second verdict was appealed, the New Jersey Supreme Court had ruled in another case, Cornett v. Johnson & Johnson, that New Jersey courts should continue to treat statutes of limitations the same way they treat other substantive law when a choice of law question arises in a case, applying sections 145, 146, and 6 of the Restatement.

The Appellate Division cited Cornett in its ruling, which found that the trial court had erred in allowing the McCarrell case to move forward. However, the court questioned whether that was actually the approach the New Jersey Supreme Court would prefer since, as the plaintiff pointed out, section 142 of the Restatement does specifically address statutes of limitations questions.

The decision was appealed, and the New Jersey Supreme Court agreed to hear the case.

NJCJI filed an amicus brief in this case in order to provide more historical context to the court about the development of New Jersey’s existing law.  Our brief demonstrates how the history of the New Jersey Supreme Court analysis undermines the rationale for the plaintiff’s proposed rule.

We began our brief with an analysis of the New Jersey Supreme Court’s decision to break from the longstanding common law rule, which treated statutes of limitations as procedural rules, and was then embodied in Restatement section 142. The court determined that the rationale for applying home state procedural rules simply did not apply to statutes of limitations, since there should be no legal right without a legal remedy. It also noted that supplying a right without matching that right with a remedy would encourage forum shopping.

Emphasizing the reasoning behind the court’s decision to abandon the default rule of applying the forum-state’s statute of limitations was essential. Simply stressing the perils of forum shopping would not have been an effective argument against adopting Section 142, since the rule has been updated so that it is no longer a simple forum-state-controls provision. The revised Section 142 now includes a multi-factor most significant relationship test, but it begins with a default presumption that the forum state’s law should apply.

The concern, of course, is that as a practical matter, the multiple factors would always be deemed to be in equipoise and that the forum state will typically control. And indeed, that was the plaintiff’s argument in this case. But arguing that a test is likely to be misapplied in the future is not always persuasive. By demonstrating from prior New Jersey Supreme Court precedent that the statute of limitations of the forum state was simply not relevant to the analysis, we could explain why adopting Section 142 would not merely be ill-advised, but contrary to the Court’s analysis in Heavner v. Uniroyal.

The New Jersey Civil Justice Institute thanks David R. Kott, Edward J. Fanning, and Gary R. Tulp of McCarter & English, LLP, for their work on this case on NJCJI’s behalf.