Trick or Treat… or Lawsuit? 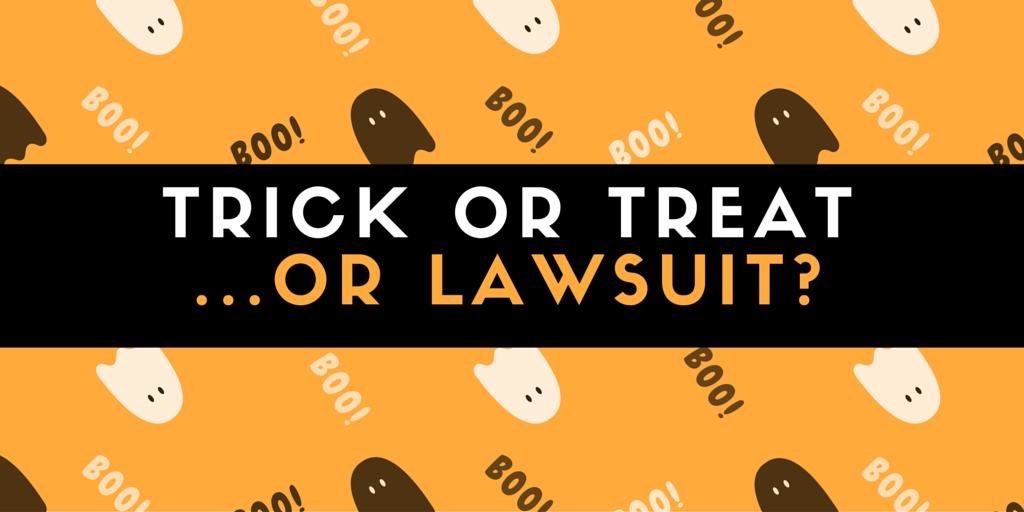 This spooky seasons brings out ghosts, ghouls, and all manner of monsters, but it is also a magnet for litigation. This leads us to ask, trick or treat… or lawsuit?

Delaware has a reputation for sensible business law, but apparently its tort law needs some fine tuning.

For almost 30 years Punkin Chunkin enthusiasts had gathered in Delaware farmer’s field to see just how far they could hurl a pumpkin via slingshots, catapults and pneumatic cannons. But that all came to an abrupt halt after a volunteer who was injured in an ATV accident at the event filed a lawsuit against the organizers. The suit settled for an undisclosed amount, but it must have been substantial since it spooked the insurance companies enough they no longer offer affordable coverage.

Even the Smithsonian got into Punkin Chunkin.

According to legal commentator Bob Dorigo Jones, Delaware Senator Brian Pettyjohn “introduced legislation to cap pain-and-suffering awards in lawsuits against non-profit charities sponsoring annual events, but as WMDT reported in a follow-up story, it was blocked in committee, and ‘supporters of the bill said lobbying by trial lawyers defeated the measure.’”

If you are a Punkin Chunkin lover don’t despair, there are a few officially sanctioned events occurring this fall, just not in Delaware.

Out of Control Employment Law

You know things have gotten weird when a law firm is advising employers on best practices for office Halloween parties.

According to the author, employers playing on throwing an office Halloween bash should set guidelines that prohibit costumes that are unsafe, sexually suggestive, or offensive based on age, sex or sexual orientation, religion, national origin, race or other protected group. The attorney also discourages employers from allowing employees to wear costumes that are “too frightening.”

If crafting those guidelines seems a bit intimidating, don’t worry! The law firm that provided this critical costume guidance is ready to advise you on all of your holiday party policies!

Halloween Decorations: Your First Amendment Right, or a Legitimate Threat?

Last year’s October issue of the Texas Bar Journal featured a round-up of some of the most notable Halloween-related cases filed in recent years. A couple of suits over Halloween decorations that disparaged the neighbors are quite interesting.

In one suit, a neighbor alleged that the fake tombstones on the lawn next door were “defamatory, harassing, and caused mental anguish.” In another tombstone suit, the neighbors called the cops because they said they felt threatened by the phony epitaphs. That suit went all the way up to the 7th Circuit, which found Halloween decorations to be protected free speech. The article reports that the court also noted, “Lawsuits like this one cast the legal profession in a bad light and contribute to the impression that Americans are an overlawyered and excessively litigious people.”

The Texas article also mentioned a lawsuit filed against New Jersey’s own Johnson & Johnson after a man dressed as a sheep suffered burns when his cigarette caught his cotton ball-based costume on fire. The plaintiff filed a personal injury suit against Johnson & Johnson, and a jury awarded $550,000 in damages. The trial judge JNOV’ed that verdict, holding that there was no duty to warn that cotton is flammable, and the 6th Circuit affirmed.

That case got us wondering if there were any New Jersey based Halloween-related lawsuits. NJCJI staff did some legal research, but it turns out there aren’t many civil cases out there stemming from encounters with spooks and spirits (criminal suits is a whole different story) filed in this state. Let’s hope this trend continues, and common sense prevails this holiday weekend!