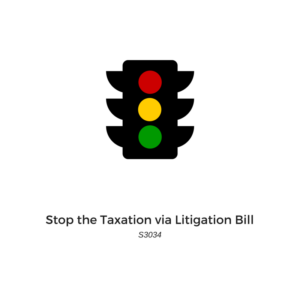 During its marathon session this afternoon the New Jersey Senate voted 23-14 to pass S3034, which would raise taxes on companies and individuals that have been ordered to pay punitive damages.

Under current law, businesses are able to deduct punitive damages they have paid out. S3034, which is being sponsored by Sen. Sweeney (D-3), and its Assembly counterpart McKeon’s (D-27) A4583, would make punitive damages taxable. Businesses would be hit by a double whammy – forced to pay tax on money that has already been redistributed by the judicial system.

The Assembly has yet to act on this legislation, so contact your Assembly members now and tell them not to take up this bill. Taxation via litigation is bad for business and bad for New Jersey.