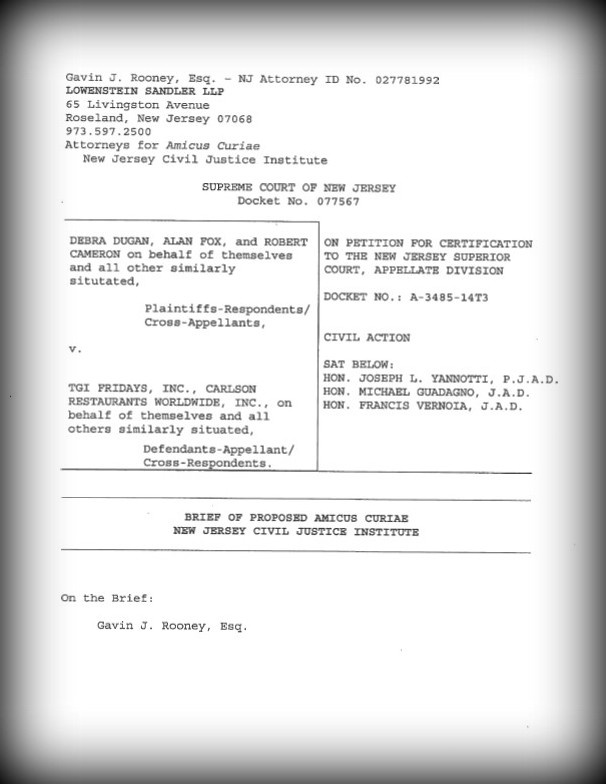 The New Jersey Civil Justice Institute has filed an amicus brief in a class action brought by consumers who claim a restaurant’s failure to clearly post prices in the menu on all drink items violates New Jersey’s Consumer Fraud Act (CFA) and Truth-in-Consumer Contract, Warranty, and Notice Act (TCCWNA). NJCJI has been spearheading the effort to reform both the Consumer Fraud Act and the Truth-in-Consumer Contract, Warranty, and Notice Act, so we are very interested in what the court will do with this case and a similar case where the court will decide whether “charging different prices for the same beverage, depending upon where in the restaurant the beverage was served” can be the basis of a CFA and TCCWNA class action.

In Dugan v. TGI Friday’s, Inc., a class of plaintiffs that includes “all TGIF customers who had ‘purchased items from the menu that did not have a disclosed price’” is suing all of the TGI Friday’s restaurants located in New Jersey. The plaintiffs allege that failing to list drink prices on the menu, and charging a different price at the bar than at a table, are violations of two of New Jersey’s consumer protection laws, the Consumer Fraud Act (CFA) and Truth-in-Consumer Contract, Warranty, and Notice Act (TCCWNA).

This case has been working its way through the New Jersey court system for quite some time. In fact, this is the third time the New Jersey Supreme Court is seeing it.

It was filed in January 2010, and in June 2010 TGI Friday’s tried to get it dismissed for failure to state a claim upon which relief could be granted. The trial court denied TGI Friday’s motion, and the restaurant chain appealed that decision.

In 2012, plaintiffs filed a motion for class certification, and TGI Friday’s responded with a cross-motion for summary judgment. The trial court denied the motion for summary judgment and certified the class. After the trial court denied TGI Friday’s 2015 request that the class be decertified or re-defined, the restaurant chain appealed the class certification decision, and the trial court’s order that potential plaintiffs be notified about the case to the appellate division. The appellate division once again said it would not hear the appeal, so the defendant again appealed to the New Jersey Supreme Court. Just like the previous time, the high court took up TGI Friday’s request for an appeal. The Court stayed the case and directed the appellate division to rule on the merits of the class certification.

As an aside, the right to interlocutory appeals is an issue NJCJI has pressed the court system on for quite some time, and we are pleased that the New Jersey Supreme Court is requiring the appellate division to allow these appeals more frequently.

In March 2016, the appellate division held that class certification was inappropriate because “common issues of fact as to whether TGIF’s customers who purchased unpriced soda, beer or mixed drinks predominate over issues that pertain to individual class members.”

The plaintiffs appealed, and the New Jersey Supreme Court agreed to take up the case for a third time, along with a similar case, Bozzi v. OSI Restaurant Partners, LLC.

The court has asked the following question in both cases:

“Is class certification appropriate in this action where plaintiffs allege that defendant violated the Consumer Fraud Act (N.J.S.A. 56:8-1 to -184) and the Truth-in-Consumer Contract, Warranty, and Notice Act (N.J.S.A. 56:12-14 to -18) by failing to include drink prices on its menu?”

In the Dugan case, the court will also determine whether “charging different prices for the same beverage, depending upon where in the restaurant the beverage was served” can be the basis of a CFA and TCCWNA class action.

The New Jersey Civil Justice Institute filed an amicus curiae brief in this case because we have seen an explosion of TCCWNA class actions filed over the last few years, yet many of the terms in the statute remain unclear.

We argue that only “aggrieved consumers” should have standing to bringing a TCCWNA lawsuit, and consumers who have not, at a minimum, been exposed to the allegedly offending contract or notice are not aggrieved.

We also point out that TCCWNA class actions are not more efficient than individual litigation in situations where a class-member-by-class-member mini-trials are necessary to determine which consumers are “aggrieved.”

The New Jersey Civil Justice Institute thanks Gavin Rooney of Lowenstein Sandler for his work on this case on NJCJI’s behalf. If you would like to support our TCCWNA reform efforts, please contact NJCJI’s chief counsel, Alida Kass.