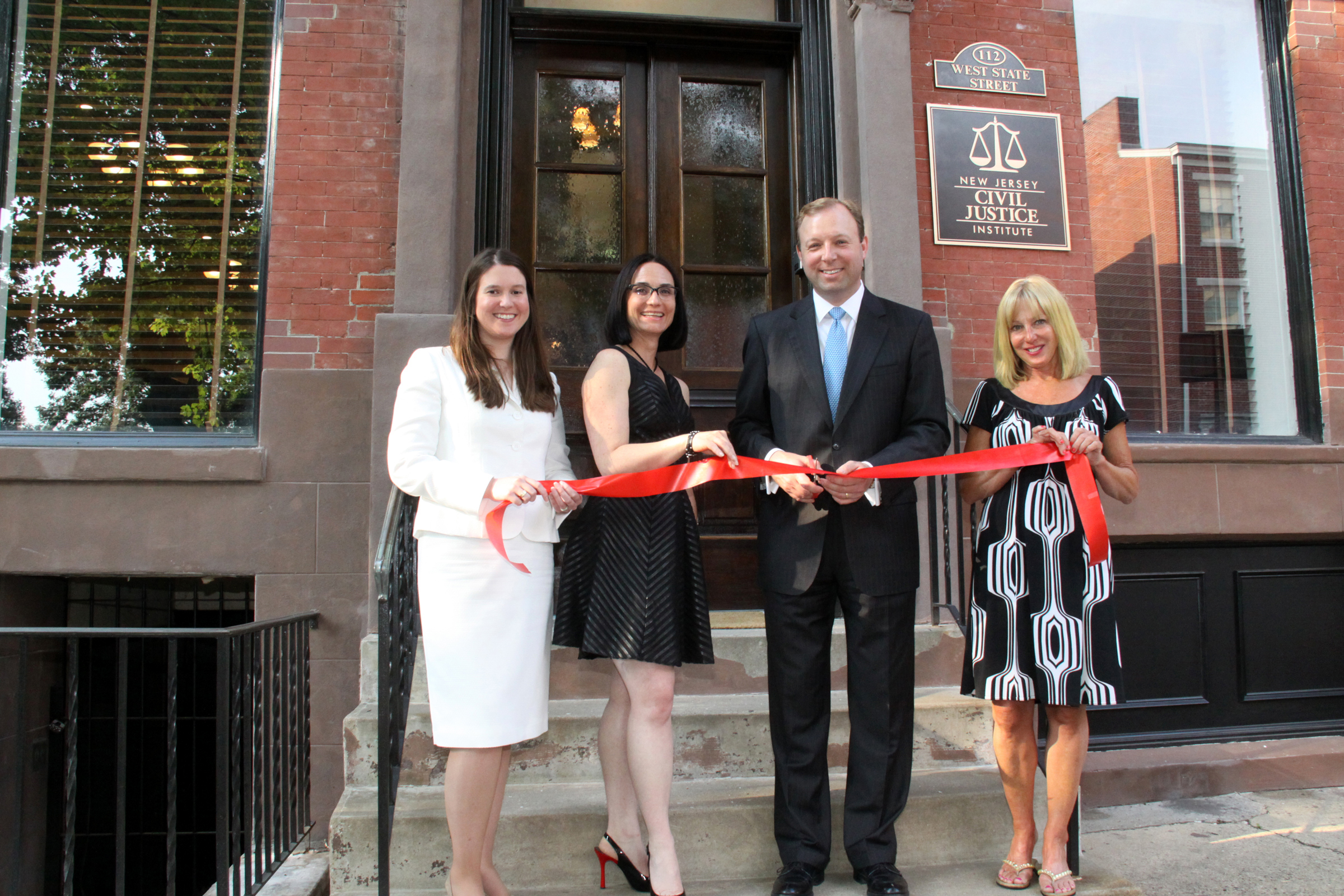 In 2007, the New Jersey Lawsuit Reform Alliance was formed as a bipartisan legislative advocacy organization focused on reforming New Jersey’s civil justice laws to make the state a more attractive place to do business. While legislative outreach remains a core function of the organization, we have broadened our mission in recognition of the fact that the courts, the executive branch, and the state’s attorneys all play a role in shaping the state’s civil justice system. We must be, and are, engaged with each of these bodies in order to meet our goal of being New Jersey’s go-to experts on legal reform and the liability implications of pending cases, proposed legislation, and Supreme Court rulemaking. We believe our new name – the New Jersey Civil Justice Institute – more fully encompasses this expanded mission.

In addition to changing our name, we have moved into a newly restored office building in historic downtown Trenton. Our investment in office space across from the State House and just a few blocks from the Supreme Court signifies our commitment to becoming a lasting influence on New Jersey policy-making.

“Our new name reflects a more comprehensive approach to improving New Jersey’s civil justice system. Our goal is to represent business’ concerns in all three branches of government, as well as in the larger legal community,” said NJCJI President Marcus Rayner. “New Jersey needs legal reform if it is to continue to be home to the most innovative industries. Each day seems to bring additional news confirming what we already know: New Jersey needs to restart its economic engine. In the short run, legal reform can send an important pro-business message without the loss of tax receipts or an increase in spending. In the long run, states with improved litigation climates see more economic activity in high-paying jobs, leading to increased revenue collections.”

NJCJI and its members support a number of common sense legal reforms that will ensure the state’s legal system resolves disputes expeditiously and impartially, based solely upon application of the law to the facts of each case. Such a system fosters public trust and motivates professionals, sole proprietors, and businesses to provide safe and reliable products and services while ensuring that truly injured people are fully compensated for their losses.

At our open house we highlighted these reforms in preparation for a renewed push for legal reform in New Jersey. Our efforts center around two over-arching goals: emphasizing the difference between regulation and litigation and restoring fairness to litigation.

EMPHASIZE THE DIFFERENCES BETWEEN REGULATION AND LITIGATION

The judicial system is well suited for settling disputes between parties. It is not well suited to establishing and enforcing standards for businesses. As a means of regulating the state’s businesses, litigation is an extraordinarily unpredictable and expensive blunt instrument. Nevertheless, in New Jersey, litigation has come to operate as the enforcement mechanism for a number of substantive laws, and as a sort of super-regulatory system for a number of industries already regulated by the state and federal government.

Amend the Consumer Fraud Act: The New Jersey Consumer Fraud Act (CFA) was enacted in 1960 to protect New Jersey citizens against deceptive business practices. As one of the first consumer protections laws in the country, it was heralded as a great success and served as the model for similar legislation in many other states.

Over the years, the law has been amended by the legislature and expanded by the courts into an enormous and unwieldy piece of legislation. Compliance is difficult, especially for New Jersey’s small businesses. It is prone to abuse, incentivizes unnecessary litigation, and makes even technical violations extraordinarily costly to resolve. It is now a significant national outlier in the burdens it places on businesses and the court system.

One of NJCJI’s top priorities this session is adopting some basic, technical changes that will make the CFA workable again while still providing strong protections to consumers:

Eliminate One-Sided Fee-Shifting: Fee-shifting provisions are showing up in proposed legislation in New Jersey with increasing frequency. These provisions, which allow prevailing plaintiffs to recover attorney’s fees and court costs, encourage frivolous litigation, discourage settlement, and drive up the cost of lawsuits. NJCJI believes that fee-shifting provisions should be used sparingly, only at the request of the bill sponsor, and only in situations where litigation is necessary to resolving a dispute and compensating an injured party.

Preemption: Currently everything from pharmaceutical products and medical devices to the labels on prepared foods are subject to regulation at the federal level, under the FDA. But they are also subject to ad hoc regulation at the state level via litigation. We should leave the regulation to the regulators, and provide that where the federal regulatory process has approved a given product or label, that approval preempts state litigation.

NJCJI and its members believe that a fair civil justice system resolves disputes expeditiously, without bias, and based solely upon application of the law to the facts of each case. Such a system fosters public trust and motivates professionals, sole proprietors, and businesses to provide safe and reliable products and services while ensuring that truly injured people are compensated fairly for their losses.

Standards for Expert Testimony: New Jersey is one of only a handful of states that have not yet adopted some form of the federal Daubert standard for expert testimony. Under the state’s current evidentiary rules, judges often allow testimony which might be barred as unreliable in federal court and in the majority of state courts. As a result, the New Jersey courts are an attractive forum for litigation based on “junk science.” New Jersey should join the majority of other states that have adopted the Daubert standard via legislation or court rule.

Settlement Trust Transparency: The “easy money” that flows out of settlement trusts tend to attract unscrupulous players, and the lack of transparency in the process makes the cheating and double-dipping difficult to catch. Several other states have passed or are currently considering legislation that would increase settlement trust transparency and discourage fraud so that settlement dollars are available to legitimately injured parties, New Jersey should do the same.

Cap Appeal Bonds for all Defendants: A key protection against an unfair civil verdict is the ability to seek recourse through an appeal. Unfortunately, most defendants in New Jersey are required by law to post the entire amount awarded as a bond before they may appeal a decision against them. Judges can also require that additional bond money is posted to secure attorneys’ and court fees. Capping the bond that must be posted in order to appeal an adverse decision would reduce dead weight litigation costs and ensure that erroneous decisions can be appealed in a cost-effective fashion.

Class Action Reform: Although designed to promote judicial efficiency and fairness, class actions have become a means to extort a settlement out of defendants without considering the merits of the case. Amending New Jersey court rules to permit interlocutory appeal of class certification decisions would enhance the predictability and fairness of the judicial process, and increase the likelihood that cases are decided on the merits rather than the cost of litigation.

Foreign Judgment Recognition Act: When courts outside of the United States hear disputes involving US citizens, those foreign judgments can be brought back to the US for enforcement against US assets. The recognition and enforcement of foreign judgments is a matter of state law, so there is an incentive to forum-shop for the most lenient state court system. New Jersey’s law should be updated to strike an appropriate balance between enforcing legitimate judgments and challenging abusive foreign judgments.

Medical Liability Reform: It’s time for a change to New Jersey’s medical liability system. Lawsuits are driving up the costs of liability insurance for physicians to the point that many are restricting their practices, moving out of state, or retiring. Other physicians are practicing defensive medicine in an effort to avoid being sued, which adds to the already high cost of healthcare, and drains resources out of the system. NJCJI is working with a coalition of healthcare professionals and providers interested in advancing common sense reforms that will preserve patients’ access to care and help reduce health care costs.

If you have questions or comments about any of these policy initiatives, or the new name, new building, or expanded mission, please contact a member of the NJCJI team.