It’s Not That Courts Can’t Do It, It’s That They Shouldn’t Have To 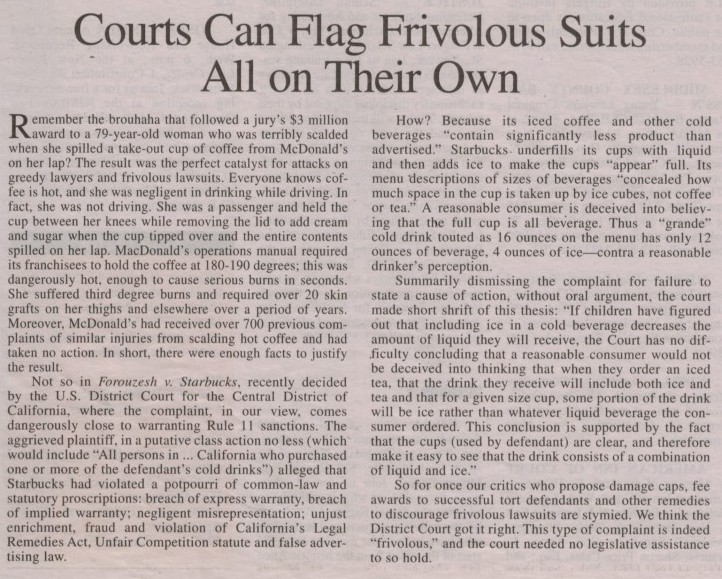 In a recent issue of the New Jersey Law Journal, the Editorial Board hailed the work of the U.S. District Court judge in California that quickly disposed of the headline-generating case over the amount of ice Starbucks puts in its iced coffees. Wonderful. As the Board notes, the case “comes dangerously close to warranting Rule 11 sanctions.”

What is disappointing, however, is that the Law Journal’s Editorial Board seems to think this single case, which even they admit is an outlier, is evidence that our system is working, that legal reform is not necessary, and that “courts can flag frivolous suits all on their own.”

Courts should certainly be applauded when they are able to efficiently work through their dockets, separating the wheat from the chaff, and tossing meritless claims. But even quick legal work is not cost free. Starbucks undoubtedly had to spend money fighting this case. Money which could have been spent hiring more baristas, opening additional stores, or developing new products. The court still had to spend time and taxpayer dollars dealing with a lawsuit that would have benefited no consumers, and only enriched the attorneys who brought it.

Rather than seeing meritless cases quickly dismissed, we more often see them drag on, and drag down our economy. What is happening in the Subway “Footlong” lawsuit, which was first filed in New Jersey under our state’s Consumer Fraud Act (CFA), is more representative of the treatment lawsuits that don’t pass the “laugh test” receive. Rather than being dismissed, the suit was allowed to proceed. So, Subway settled the claims against it, agreeing to pay the named plaintiffs $500 apiece and the attorneys $525,000. All the rest of us get is the death of the $5 Footlong deal and assurances that Subway will improve its quality control program. They already apportion the dough by weight, and the standardization of toppings ensures all customers get the same amount of food, so basically we all get to pay more to ensure Subway keeps doing what it already does.

Wouldn’t it be great if instead of forcing our courts to waste time dealing with cases like the Starbucks iced coffee suit and the Subway sandwich suit, such lawsuits weren’t brought in the first place? Suits like these are filed because the skewed incentives of class actions encourages them, and because courts so infrequently impose sanctions, that there is little downside.

Removing the statutory incentives to sue when no one has been harmed, and only the attorney bringing the case stands to gain, is the type of legal reform we desperately need.

It is time to have a serious discussion about our legal system. Like any complex system it is not perfect and everyone, no matter what their current viewpoint, should be open to talking about ideas for improving it.